Atomic Blonde released in August 2017, starring Charlize Theron and James McAvoy and directed by David Leitch, is a super-stylish and action-packed spy thriller with a convoluted plot. It’s set in Berlin, against the background of the fall of the Berlin Wall and the end of the Cold War, and based on the comic The Coldest City by Antony Johnston and Sam Hart.

MI6 send their best troubleshooter to Berlin to retrieve a watch full of vital information, and the defector who produced it. Betrayed by a mole in MI6, the agent must outmaneuver the rival intelligence services competing for the watch, to save the defector and discover who the traitor is.

It’s 1989. In Berlin, a rogue KGB agent kills an MI6 agent and steals his watch. The watch has embedded inside a list of compromising information, supplied by a Stasi officer codenamed ‘Spyglass’, that will reignite the Cold War. Spyglass has also memorised the entire list and is now on the run in East Berlin.

The day after the MI6 agent’s death, MI6 send another MI6 agent, Lorraine Broughton, to Berlin to recover the watch and help Spyglass defect to the West. MI6 also task Lorraine with discovering and eliminating the double agent, codenamed ‘Satchel’, who betrayed the murdered agent.

As soon as Loraine arrives in Berlin, the KGB attempt to kidnap her, but she fights them off and then meets MI6’s Head of Station, David Percival, who uses cover as a black-market dealer.

Lorraine investigates the murdered MI6 agent’s apartment. While she’s there, the police arrive and she has to fight her way out. As only Percival knew she was going to the apartment, Lorraine becomes suspicious of him.

That night, Lorraine makes contact with a French agent who also has information about Percival. Lorraine begins a relationship with the French agent.

The rogue KGB agent makes it known that he will sell the watch to the highest bidder. Percival arranges to meet the rogue agent, but instead of paying, kills him and takes the watch for himself. Percival has ‘gone native’ in Berlin and is now operating for his own benefit, not MI6’s. With the watch in his possession, he needs to eliminate Spyglass, so he is the sole possessor of the information and can make a fortune selling it…

Percival [blackout]arranges for Lorraine to smuggle Spyglass from East to West Berlin, and then betrays the operation to the KGB. Lorraine fights off the KGB thugs, but eventually Spyglass drowns when the car they’re escaping in crashes into the river.[/blackout]

Percival [blackout]realises the French agent knows too much and kills her. Despite this, Lorraine discovers the photographs the French agent took of Percival with the rogue KGB agent. Percival tries to escape, but Lorraine tracks him down, kills him, and takes the watch.[/blackout]

Lorraine [blackout]gives MI6 the photographs of Percival and doctored audio recordings which seem to prove that Percival was Satchel and that Lorraine eliminated him as a traitor. She also claims not to know where the watch is. It seems that Lorraine is the KGB double agent, Satchel. [/blackout]

Lorraine [blackout]meets her KGB handler in Paris. But he wants her dead too. She kills the assassins, and before killing the KGB handler tells him that in fact she was not just betraying MI6 to the KGB, but was manipulating both MI6 and the KGB on the orders of the CIA.[/blackout] 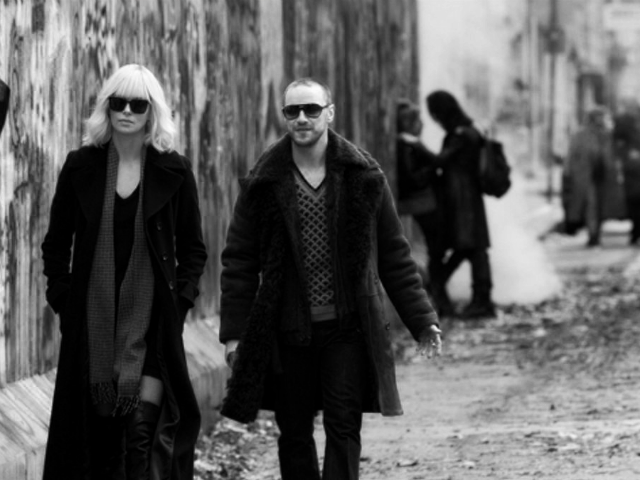 The Mission is a standard one: retrieve the watch full of secrets and/or help Spyglass defect. The Mystery element is discovering the mole in MI6, whose identity remains uncertain until very near the end of the story.

One thing I liked a lot about Atomic Blonde were the fight scenes.

The key scene of the movie is the huge – almost ten minute – running fight as Lorraine tries to scrap her way across the border with Spyglass in tow and the KGB determined to stop her. She fights the KGB thugs until she can barely stand and her whole body seems like a mass of cuts and bruises. She’s not invincible.

I also liked that the fight scenes took into account the size, weight and strength differences between men and women. Something that many movies don’t recognise is that women cannot go toe to toe with men twice their size.  Women have to fight differently – which doesn’t mean they can’t be badass fighters, just that they have to use weapons, speed and agility to negate the differential.

Charlize Theron herself pointed this out saying, “That’s the reality, I can’t fight the same as a guy can fight but that doesn’t mean that I can fight any less, or any less well, than a man.”

‘The List of Every Agent’, supposedly contained in the watch and memorised by Spyglass, is a lazy and massively overused cliché (see Skyfall for just one example). It also doesn’t make a lot of sense that the Stasi agent, Spyglass, could even have a list of every agent in the KGB, MI6 and the CIA. It’s a blatant MacGuffin and even weaker in that by the end isn’t even important.

I’m not sure that several scenes in the movie make sense in light of the twists at the end. Massive spoilers obviously:

Atomic Blonde could have been a James Bond movie with a few tweaks and eight times the budget – Atomic Blonde cost $30M to make compared to $250M for SPECTRE. Both feature emotionally damaged, über-cool, wisecracking protagonists who drink a lot of vodka, in plots that exist largely to string together a bunch of action scenes.

Atomic Blonde gives the audience what many people say they want: female-led spy thrillers. So, how’s it doing, commercially? Well, in the USA it opened in fourth place behind war film Dunkirk, kids cartoon The Emoji Movie and female-led comedy Girl’s Trip. It’ll make a profit, but only because its budget was relatively low.

In the end, if people want female leads in spy thrillers, or the producers to risk a quarter of a billion dollars on a female James Bond, they need to actually go and see female-led spy thrillers like Atomic Blonde… otherwise, the studios will just make Girls Trip 2.

Atomic Blonde has a great soundtrack of British 1980s hits. Here’s the ones I noticed:

Super-stylish and tons of fun – especially if you like eighties music.

Atomic Blonde is currently in cinemas.

If you’d like to read the original comic Atomic Blonde is based on, The Coldest City, it’s available on Amazon US here

If you’d like to discuss anything in my Atomic Blonde review, please email me. Otherwise, please feel free to share it using the buttons below.