Charade staring Cary Grant as Peter Joshua, and Audrey Hepburn as Reggie Lampert, directed by Stanley Donen, and released in 1963, is a good example of a romantic-comedy-espionage-thriller – a genre crossover that’s hard to pull off.

When woman’s husband is murdered, she discovers that he was a rogue agent who stole a fortune from the CIA. With her life in danger and both the CIA and her husband’s double-crossed accomplices on her tail, she has to find the money and decide whether she can trust the mysterious man who’s helping her.

It’s 1963. Reggie Lampert has decided to divorce her husband. She returns to Paris to tell him, but finds their flat empty and her husband missing, soon learning that he has been murdered. His only possessions when he died were a letter to her, a diary, four fake passports and a ticket to Venezuela. Later, Peter Joshua, who Reggie met briefly while on holiday, visits her. He says he read about her husband’s murder in the newspapers and wants to help.

Next day at the funeral, a gang of three men check Reggie’s husband is really dead, and a CIA agent asks Reggie to meet him at the US Embassy. The CIA agent tells Reggie that the gang, which her husband was part of, stole a quarter of million dollars in gold from the US government, they want it back, and Reggie’s life is in danger if she doesn’t find it.

Peter offers to help Reggie find the money, but she quickly realises that he may actually be helping the gang. Reggie loses Peter and goes to speak to the CIA agent again. This time he tells her that the three men and her husband were rogue members of the World War II American spy agency, OSS. Together with a fourth man, who died during the operation, they stole the OSS gold. Reggie’s deceased husband then double-crossed the others and kept the gold for himself. The CIA agent also asks Reggie to find out who Peter really is.

When Reggie confronts Peter, he claims he’s really the brother of the dead gang member and wants to find out who murdered him. Later, Reggie and Peter meet with the gang and Peter puts the idea in the gang member’s heads that one of them has the money. After this, two of them are murdered. Meanwhile, Reggie falls in love with Peter. She still doesn’t really trust him though, especially after the CIA agent tells her that the dead gang member didn’t have a brother…

Reggie, Peter and the remaining gang member [blackout]all go to the location of the last appointment noted in Reggie’s husband’s diary, which is a stamp market. Separately, they all realise that Reggie’s husband must have used the money to buy valuable stamps and then stuck them to the letter he left for Reggie. Peter rushes back to get the stamps but they’re gone because Reggie gave them to a boy stamp-collector. Reggie finds the boy, but he says he’s swapped the stamps with a stamp dealer. Luckily, the dealer is an honest man and he returns the stamps to Reggie.[/blackout]

Reggie [blackout]finds the last gang member murdered. It looks like Peter is the murderer, so Reggie arranges to meet the CIA agent and give him the stamps. When she leaves the hotel, Peter chases after her. At the meeting point, Reggie ends up trapped between the two men.[/blackout]

Peter [blackout]tells her that the CIA agent is really the fourth gang member, who was originally thought dead. The CIA agent admits this, and that he killed all the others. He tells Reggie to give him the stamps or he’ll kill her too, but Peter shoots at him, giving Reggie chance to hide. Just as the CIA agent is about to kill Reggie, Peter manages to drop him through a trap door, killing him.[/blackout]

Next day, Reggie [blackout]goes to the embassy to give the stamps to them. When she gets there she’s surprised to find Peter, who’s really the US Treasury agent tasked with recovering the money. With his true identity revealed, Peter admits he loves her and promises to marry her.[/blackout] 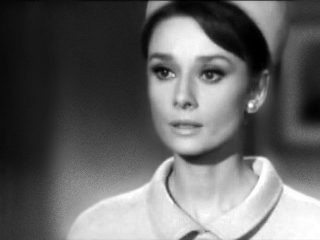 The best thing in Charade is Audrey Hepburn. The movie relies heavily on the charisma of the two stars, and particularly on the screen presence of Hepburn.

Charade is a bit unusual, for the time at least, in that Hepburn is the main character and Cary Grant the helper/love interest. Some of that, reportedly, was because Grant was very conscious of their age difference (he was fifty-nine and Hepburn thirty-three). He insisted that Hepburn’s character had to pursue his, to avoid him coming over as the creepy older guy.

This does lend a slightly disjointed air to proceedings as the bulk of the plot is about whether Reggie can trust Peter or not, which is then rather undercut by scenes of Reggie announcing how much she loves him.

The dénouement is also undercut by the telephone call shortly beforehand that gives away who’s really who. Reggie’s dilemma at the end then is non-existent – it’s obvious who she should trust.

Charade has a Mission plot (see spy movie plots). Reggie’s mission being to find the money. But the plot is not really the strong point, and makes limited sense.

Still, it’s the kind of film where the details of the plot and the immense plot holes aren’t that important –  a triumph of star-power and style over logic and plot substance.

Some characteristics that seems to help are:

Charade is often described as “the best Hitchcock film Hitchcock never made.” because it borrows a lot of its style from Hitchcock’s comedy-romance-thrillers like North by Northwest and The Thirty-Nine Steps

Alfred Hitchcock was a master of the comedy-thriller and he said: “For me, suspense doesn’t have any value if it’s not balanced by humour.” which is really interesting because in so many comedy-thrillers the humour seems to detract from the suspense. In contrast, Hitchcock felt that comedy could be used to heighten tension, and that sympathetic, witty characters, and ironic and whimsical situations, can make a story suspenseful and funny at the same time. 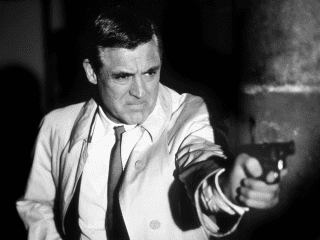 Hitchcock’s movies also often revolve around a ‘MacGuffin’ – an item that’s of no direct plot relevance, that the characters are all searching for. In Charade, the MacGuffin is the stolen money, in North by Northwest and The Thirty-Nine Steps it’s stolen secrets.

If you’re wondering if a story involves a MacGuffin, ask yourself if the same events could be shown but with the characters in conflict over diamonds, secret plans or important papers, rather than what they’re actually chasing after. If the specifics are not important, then it’s a MacGuffin.

Deserves its reputation as “the best Hitchcock film Hitchcock never made”. Worth watching for Audrey Hepburn alone.

Due to a copyright mistake when it was first released, Charade is in the public domain and so legally available on the internet, for example here.

If you’d like to discuss anything in my Charade review, please email me. Otherwise, please feel free to share it using the buttons below.