Iron Sky is a 2012 alternate history black comedy about a world where the Nazis fled to the moon in 1945. In 2018 they invade Earth. It was directed by Timo Vuorensola.

In 2018 a US astronaut is captured on the moon by Nazis who have been living there since 1945. He is forced to help them with their plans to conquer the Earth, and as the invasion begins he tries to prevent their super-weapon from destroying the world.

It’s 2018. An American space mission lands on the Moon. The astronaut, James Washington, discovers a moon-base and is captured by the Nazis who live there. A Nazi scientist examines Washington’s iPhone, and realises how far behind the lunar Nazis have fallen in computing power.

The moon-Nazi Führer, orders his second in command Klaus Adler, and Earth specialist Renate Richter to take a flying saucer to Earth and collect more computers, to power a super-weapon the Nazis have been building for decades.

Landing in New York, the Nazis are introduced to the President and they begin a successful campaign of Nazi-style propaganda to get the president re-elected, enjoying themselves on Earth so much that they forget their mission.

The moon-Nazi Führer follows Adler to New York to find out why it is taking so long to retrieve the computers, but is killed. Adler announces he is now the Führer, steals an iPad and returns to the moon. Renate who has been deluded by Nazi propaganda to believe that they intend a peaceful invasion of Earth is finally convinced that Adler’s intentions are malign, and joins Washington in attempting to prevent the attack.

Adler launches the invasion of Earth using a fleet of space-Zeppelins and flying saucers, and a giant spaceship called Götterdämmerung that is controlled by the stolen iPad. The nations of the world respond with a fleet of secretly constructed military spacecraft and battle commences.

The [blackout]battle is over, but during it, the presence of large tanks of priceless helium-3, mined by the Nazis, has been discovered. Fighting over the spoils of war quickly degenerates. On the moon, Renate and Washington take charge of the few survivors of the battle as a nuclear war starts on Earth.[/blackout] What could be more fun? What could possibly go wrong with such a great concept? Well…

Iron Sky wants to be Doctor Strangelove – a cult black-comedy with a political punch. Unfortunately, black-comedy is a very difficult thing to pull off. Instead Iron Sky comes across as trying for a camp, B-movie, “so bad it’s good” vibe.

The failures are almost all down to the plot structure, or lack of one. Iron Sky has a Playing Defence plot (See Four archetypal plots) but it lacks focus, sharpness and even logic. The antagonist’s quest, for an iPad to power the Nazi super-weapon, sets a tone of silliness that undermines any attempt at biting or black humour.

The movie also has no real Protagonist. Washington is probably supposed to be the Protagonist, but doesn’t drive the story and practically disappears for large parts of the movie. Renate is the only other sympathetic character but isn’t a strong protagonist either.

The central section, where Adler becomes successful in US politics by using Nazi slogans could have gone somewhere, but just disappeared again in order for the basically unrelated invasion finale. The invasion itself and the concluding space battle work well as CGI-fests, but they have very little emotional punch.

The biggest problem though is that Iron Sky just isn’t that funny. Most of the best jokes are in the trailer (“Vere are ve from?” “Ze dark side of ze moon!”) and the rest barely register a ‘huh?’. The satire of US politics could have worked, but it’s difficult to satirise a figure as ridiculous as Sarah Palin.

The acting is pretty mediocre as well. Not that it’s bad, it’s just no one stands out for the good guys as charismatic, or for the bad guys as particularly evil. There’s no central performance to grab the audience and carry them along.

This isn’t the actor’s fault though – there are too many weak characters in the movie – for example the two largely interchangeable Nazi leaders, Adler and the Führer who could easily have been combined.

One thing I do have to salute the makers of Iron Sky for is their use of crowdsourcing. They raised a considerable portion of Iron Sky’s budget through crowdfunding and thousands of volunteers helped with design, research and marketing.

Though I have some problems with the screenplay of Iron Sky, it does have some really nice art direction, and CGI that wouldn’t look out of place in a much bigger budget movie. Iron Sky doesn’t look like a movie that got made on a $7.5 million budget, and that’s pretty amazing.

A brave try, but it could have been so much better. 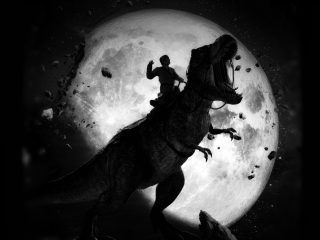 The producers of Iron Sky have announced a sequel, this time entirely crowdfunded, as they don’t want to ‘compromise their vision’ by taking money from movie production companies.

Doubling down on the insanity of the first movie, Iron Sky: The Coming Race has Adolph Hitler and Vladimir Putin leading an army of dinosaurs from inside a hollow earth, and opposed by a machine-gun-toting Jesus.

How can it fail?

Seemingly endlessly delayed, Iron Sky: The Coming Race is due in 2019.

If you’d like to discuss anything in my review of Iron Sky, please email me. Otherwise, please feel free to share it using the buttons below.