Kingsman: The Golden Circle released in September 2017, starring Taron Egerton, and directed by Matthew Vaughn, is an espionage-comedy-thriller sequel to Kingsman: The Secret Service. It follows the continuing adventures of the Kingsmen – an independent spy organisation dedicated to saving the world from megalomaniacs.

After the Kingsman organisation is all but destroyed by the notorious Golden Circle, the survivors contact their American counterparts, Statesman, for help. The Kingsmen must learn to work with the brash operatives of Statesman to have any chance of breaking the Golden Circle.

It’s the modern-day. Gary ‘Eggsy’ Unwin, who became a Kingsman in Kingsman: The Secret Service, is leaving Kingsman headquarters when he’s attacked by a failed Kingsman trainee, Charlie. They engage in a fight and car chase across London. Unnoticed by Eggsy, the fight enables a hacking attack on Kingsman.

Later, missiles, targeted by the hacked information, destroy the Kingsman bases and all the Kingsman agents. Only Eggsy, who’s in Sweden with his girlfriend, Princess Tilde, and Merlin, the head of training, survive.

Merlin announces that the ‘Doomsday Protocol’ is in effect. They’re both stunned when they open the Doomsday Protocol safe and find nothing but a bottle of ‘Statesman’ bourbon. The bottle leads them to a whiskey company in Kentucky. While they’re investigating the company, a Statesman agent captures them. Statesman turns out to be a similar independent intelligence organisation to Kingsman.

In another surprise, Eggsy discovers that the Statesman organisation rescued his mentor, Harry Hart, who he believed to be dead. Hart though now has amnesia and doesn’t recognise Eggsy.

Meanwhile, Poppy Adams’s organisation, ‘The Golden Circle’, controls the entire drug trade of the world from a secret hideout in Cambodia called ‘Poppyland’. She broadcasts a message to the US President telling him about a toxin in every recreational drug that will kill all drug users. There’s an antidote, but in return for releasing it, she wants all drugs legalised and immunity from prosecution so she can openly and legally control the world’s drug trade

The President pretends to agree to Poppy’s demands, but secretly has no intention of complying, believing that if drug users die then he will ‘win the war on drugs’. Instead, on the President’s orders, the US Army quarantines the victims.

Eggsy finally manages to shock Harry into regaining his memory of being a Kingsman. Harry, though not the agent he was, accompanies Eggsy and Whiskey to Italy. Eggsy manages to steal a vial of the antidote, but it gets broken during a gunfight with Golden Circle soldiers. He does though overhear the name of a Golden Circle courier. This enables Merlin to discover where Poppyland is…

Eggsy, [redact redactor=’Tilly’ date=’01/17/2018′]Merlin and Harry fly to Poppyland to confront Poppy. After a lot of fighting, and the death of Merlin, who sacrifices himself to save the others, Harry and Eggsy inject Poppy with the same toxin as her victims. She gives them the password to release a fleet of antidote carrying drones, but then dies of an overdose.[/redact]

Before [blackout]Harry can enter the password, Agent Whisky arrives. He doesn’t want them to enter the password, believing, like the president, that the world is better-off without drug users. After another fight, Eggsy and Harry manage to kill Whisky. Harry then enters the password that releases the antidote.[/blackout] 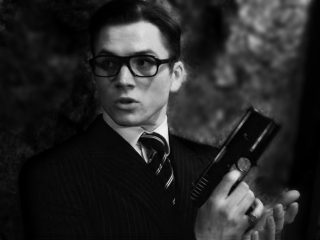 I’ve discussed comedy-thrillers a lot recently and tried to analyse what makes them work (see my review of comedy-thrillerCharade for example). To me, Hitchcock is the real master of the comedy-thriller, in films like North By Northwest. Kingsman’s humour though is a different sort, and doesn’t work as well for me.

I described Kingsman:The Secret Service as a ‘Young Adult’ movie and the comedy in Kingsman: The Golden Circle isn’t much different. Yeah, it’s still pretty crass. It’s not gross-out comedy, but some of it isn’t too far away. There are a few good wisecracks, but basically it’s still juvenile stuff. The ‘Glastonbury’ section in particular was both contrived and puerile.

More of the Same

I’d be surprised if Kingsman: The Golden Circle doesn’t do well at the box office, as it’s really just another iteration of the same formula that made Kingsman:The Secret Service so popular.

Like Kingsman:The Secret Service, it’s a ’70s Bond movie’, but with a foul-mouthed, blue-collar Bond. And, like the original, it has some excellent action sequences, the two standouts being the initial car chase and the Italian ski-lift sequence.

Even the movie’s own publicity material trades on this ‘more of the same’ angle. Describing the cast and story using archetypes: “An Eccentric Villain”, “A Far-fetched Plot”, “A Token American”, “A Gentleman Spy”.

The downside is that if you’ve watched the trailer then you already know what happens in this movie.

With two Kingsman movies made and a third film planned, it’s certainly looking that way.

Kingsman: The Golden Circle: My Verdict

If you liked the first Kingsman movie, you’ll like this one too.

Kingsman: The Golden Circle is now in cinemas.

If you’d like to discuss anything in my Kingsman: The Golden Circle review, please email me. Otherwise, please feel free to share it using the buttons below.