Kingsman: The Secret Service is a comedy-thriller spy movie released in 2015. It was directed by Matthew Vaughn, and stars Colin Firth as Harry Hart and Taron Egerton as Gary ‘Eggsy’ Unwin.

When a billionaire businessman plots to ‘cull’ the human race, a trainee in a secretive independent intelligence agency has a chance to prove himself a better agent than the more privileged candidates.

It’s 1997. A British agent, Harry Hart, is involved on an assault on a terrorist base. The leader of the terrorists commits suicide with a grenade, killing a trainee agent, to Hart’s dismay. Returning to London, he leaves a medal with the dead man’s wife and young son, telling them to call the number on the medal if they are ever in trouble.

Now it’s 2014. In London, the dead trainee agent’s son, is now twenty and known by the nickname Eggsy. He’s in trouble with the police for joyriding, calls the number on the back of the medal, and is suddenly released. Hart introduces himself and they go for a drink at a local pub.

Hart tells Eggsy about the group his father was training for, the Kingsmen, an independent intelligence agency dedicated to preserving peace in the world. Eggsy is not impressed by Hart until he fights a group of local thugs and easily beats them. Later, the leader of the thugs threatens Eggsy and Hart intervenes again, telling Eggsy to go to a tailor’s shop on Saville Row. At the shop Hart tells Eggsy that the Kingsmen have a vacancy and he is putting him forward for selection.

At the Kingsmen’s country estate, Eggsy is introduced to a group of other candidates, who are all seemingly upper class and hostile. Only a young woman named Roxy is at all supportive. On the first night, the dormitory fills with water and one of the candidates drowns.

Meanwhile, a climate scientist has been kidnapped and another British agent attempts to rescue him, only to be killed by Gazelle, an assassin with lethally sharp prosthetic blades. The scientist is then given a proposition by the billionaire businessman behind his kidnapping, Richmond Valentine.

Hart goes to talk to the climate scientist, but a chip implanted in the scientist’s head explodes, killing him and injuring Hart.

Eggsy and Roxy go through Kingsman training and the other candidates are eliminated one by one until they are the only two left. Eventually Roxy is selected as the new agent and Eggsy leaves in a rage.

Valentine announces a huge offer of free phone calls and internet access. Hart poses as a billionaire with money to invest in Valentine’s plans and goes for dinner at his mansion. While there, Hart spots the name of a Kentucky church. Valentine is suspicious of Hart, and reveals little else.

Hart goes to the Kentucky church. There, Valentine sends a signal to the mobile phones that drives all the worshipers into a killing frenzy…

Valentine’s next step [blackout]is to broadcast the rage inducing signal via satellite to mobile phones across the globe causing the virtual extinction of the human race. Only the world’s elite, who are in on the plan, will survive, having been implanted with a chip that blocks the signal.[/blackout]

Eggsy goes to [blackout]the Kingsman shop. There, he realises that even Arthur, the head of the Kingsman organisation, is implanted with the chip. Arthur tries to kill Eggsy with poisoned brandy, but Eggsy switches the glasses.[/blackout]

With [blackout]the Kingsman organisation compromised, only Eggsy and Roxy can be trusted. Merlin, the head of the training division takes Eggsy to Valentine’s arctic base, while Roxy flies in a high-altitude balloon and fires a missile at one of Valentine’s satellites, delaying the broadcast.[/blackout]

Eggsy [blackout]attacks Valentine’s base, but is trapped. Merlin detonates the implanted chips killing everyone except Valentine and Gazelle. Eggsy fights Gazelle, eventually stabbing her with a poisoned blade in his shoe. He then kills Valentine, stopping the signal for good.[/blackout]

In a coda, [blackout]Eggsy, now transformed into a fully fledged Kingsman, returns to London and rescues his mother from her thug boyfriend.[/blackout] Kingsman has a ‘mission’ plot (see Spy Novel Plots). In fact it has two mission plots, one for Hart and one for Eggsy, that come together at the end.

To me Kingsman is a ‘Young Adult’ movie. It’s not Spy Kids – it’s too violent (though the violence is almost all comic book style) and expletive-filled (over a hundred uses of the F-word) for children.

But, with a very young-looking lead (Taron Egerton is apparently twenty-six but he looks about eighteen), a not-to-be-taken-too-seriously plot by the bad guys, many scenes played entirely for puerile laughs, and several breaks of the fourth wall and winks to the audience, to me Kingsman did not seem aimed at adults.

Kingsman is very, very similar to the CHERUB series of children’s novels. In fact the plot is basically an amped-up version of CHERUB: The Recruit. It is however based on a comic called The Secret Service by Marc Millar, who was presumably heavily influenced by Robert Muchamore’s stories.

The difference is the Hart character, played by Colin Firth, who is reminiscent of Steed in The Avengers TV series, more than James Bond. The villain, his henchwoman, their world-ending plot and the set design of the enemy lair in the finale are all very ’70s Bond movie’.

There are lots of great scenes in Kingsman. The opening for example is gripping. The first fight scene between Hart and the local thugs, effective. The set-piece underwater, parachute training, and interrogation scenes tense. The confrontation over dinner between Hart and Valentine could have been electric, but was undermined by its crass product placement for MacDonalds.

Overall, the movie seems unsure about what it wants to be – is it a gritty thriller as in the scenes with Eggsy’s domestic-abuse-victim mother, and the training sequences, or is it an Austin Powers type spoof, which is what the ending turns into?

To me the lurches into camp and comedy undercut the action and often just spoil it. For example, the scene near the end [blackout]where the bad guys’ heads blow up like fireworks to the sound of Land of Hope and Glory[/blackout] was just ridiculous.

And please, what was with the Swedish princess?

The DVD is available on Amazon UK here

The Sequel: Kingsman: The Golden Circle 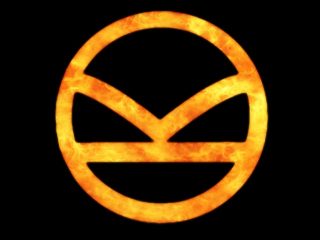 After the Kingsman organisation is all but destroyed by the notorious Golden Circle, the survivors contact their American counterparts, Statesman, for help. The Kingsmen must learn to work with the brash operatives of Statesman to have any chance of breaking the Golden Circle.

If you’d like to discuss anything in my Kingsman review, please email me. Otherwise, please feel free to share it using the buttons below.