The Orwell game is a counter-terrorist-themed, surveillance and document analysis game, sometimes described as ‘Facebook stalking: the game”, which is not entirely inaccurate. The player has to examine surveillance footage and internet records of terrorist suspects in the hope of identifying and arresting them before they carry out an attack.

As part of the move towards empathy-based gaming, the Orwell game has been a critical and commercial success. The name is, of course, inspired by George Orwell’s 1984.

When a series of bomb attacks threaten a country, an investigator must try to prove who’s responsible, so the authorities can arrest the perpetrators and prevent further attacks.

It’s 2017 in ‘The Nation’ a country with draconian security laws. The security services, which the player is part of, can access the communications of citizens to prevent crime.

Day One: The Clocks Were Striking Thirteen

A bomb explodes at ‘Freedom Plaza’ in the capital city of The Nation, Bonton, killing several people. There’s only one real lead: CCTV footage that shows Cassandra Watergate, a known anti-government protester, in Freedom Plaza just before the explosion.

Cassandra’s correspondence shows she has connections to a group called ‘Thought’ started by a professor who opposes repression, Abraham Goldfels.

The investigator finds evidence that Cassandra approves of the bombing and she’s arrested. Despite this, a second bomb explodes at Bonton’s university.

Day Two: A Place Where There Is No Darkness

Two students at the university, Harrison O’Donnell and Juliet Kerrington are leaders of Thought. Surveillance indicates a third person ‘Nina’ is also involved.

The investigator realises that both bombs exploded at places where Thought had held protests: Freedom Plaza and the university. As they’d also protested at a third location, a third bomb seems likely.

Depending on which information the investigator has uploaded, [blackout]Cassandra either identifies the third location and the army deactivate the bomb, or the bomb explodes.[/blackout]

‘Nina’ is now the main suspect as the bomber.

The investigator discovers that her real name is Nina Maternova. She’s an ex-soldier suffering from post-traumatic stress and paranoia after the death of her boyfriend in combat.

The investigator accesses Nina’s computer and finds evidence that places her near all three bomb sites.  Nina notices the investigator’s intrusion, panics and attempts to flee the country.

Depending which information the investigator has uploaded, [blackout]either Nina escapes, the police arrest her, or they kill her whilst resisting arrest.[/blackout]

Nina receives an email from Abraham, which makes it clear that he planned the bombings, although he claims he didn’t want any casualties. The investigator continues trying to locate Abraham.

Harrison and Juliet discover that if the government declare Thought a terrorist organisation then the law allows it to jail them, whether or not it has evidence implicating them in the bombings.

The investigator [blackout]discovers that Abraham has been dead for years and so someone else must have provoked Nina to carry out the bombings using his name. [/blackout]

The authorities release Cassandra. Minister Delacroix, who authorised Orwell, takes personal charge of the investigation. She orders the investigator to find where Harrison is hiding, so the police can arrest him.

When the group discovers that [blackout]Abraham is dead, Juliet confesses to impersonating him, manipulating Nina into carrying out the bombings and incriminating Cassandra. She claims that her motive was to show the investigator how dangerous Orwell is. [/blackout]

During the call, depending which information the investigator has uploaded, [blackout]Harrison will either by arrested or remain free. [/blackout]

Juliet and the other Thought members beg the investigator to shut Orwell down.

The player has a choice, either [blackout]they incriminate Abraham, Delacroix or Themselves[/blackout]:

There is also an ending where the player attempts to [blackout]incriminate Delacroix, but fails. She has all the members of Thought arrested,  rolls Orwell out and makes the investigator a wanted man.[/blackout] 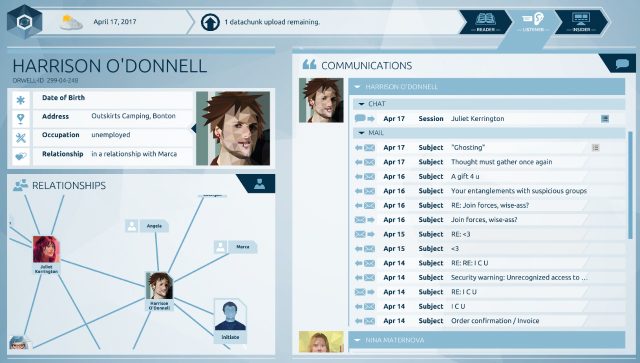 Orwell’s dossier on Harrison O’Donnell – suspected terrorist. Personal details and known relationships on the left. Surveillance log on the right.

Orwell is a relatively short game. It takes about an hour to play each ‘day’, for a total play time of five or six hours. The surveillance and document analysis elements reminded me of Spycraft: The Great Game.

One slightly annoying feature in the Orwell game was that you couldn’t withdraw information if you came to see it was incorrect. The game flags items of data that conflict, but once you’ve made a decision that’s it, even if you later realise you’ve got it wrong. It is a deliberate part of the game though – one of the flaws in the system. I suppose that information gaining a life of its own is something that happens in bureaucracies.

It’s also quite possible to take information out of context to incriminate innocents. For example, Cassandra jokes at one point she is ‘torturing’ her friend by making her go to a concert by a band she doesn’t like. The investigator can upload ‘Cassandra admits the use of torture’ to Orwell. Again this is something we sometimes see in reality, though it’s usually more subtle.

I felt uncomfortable at times playing Orwell, which is of course the point of the game. The bombs are killing people, so fundamentally something has to be done, but my supervisor’s reactions to relatively innocuous information about the surveillance targets left me questioning what to upload and what to ignore.

The suspects themselves didn’t really seem to be guilty of anything except protesting against the government’s draconian policies, and some of them seemed to be harmless. Others were blowhards and even hypocrites. For example, Harrison seems like a hot-head who’s hidden his past. It turns out he’s embarrassed about his indiscretions now he has a job in the national papers. This left me wondering if the whole bunch were just patsies being set up to take a fall by the government.

That’s because the Orwell game is an example of an emerging type of game known as an ’empathy game’, which tries to give the player realistic moral choices and show the consequences of their actions. These games are a reaction to the endless parade of ‘shooters’, where the player wins by killing hoards of faceless enemies, usually with minimal justification and no sign of the psychological toll such mass killing would produce.

Some other empathy games are:

Game like these raise questions with no easy answers.

In the Orwell game the questions raised included:

There are no answers to those questions in the Orwell game – the point is to make the player think.

There’s not much in the Orwell game that isn’t already happening. Surveillance of online activity, messages, email, post, telephone and CCTV by security forces are all routine. Intelligence agencies also use technologies barely touched on in Orwell, like facial recognition, DNA profiling, data mining, aerial and satellite surveillance and GPS location tagging. The only safeguard, in democratic, human-rights-orientated countries, is that the courts have to approve surveillance.

Excellent. If you like story-based games then you’ll love Orwell.

Want to Play the Orwell Game?

The Orwell game is available on Steam here and on Origin here.

If you’d like to discuss anything in my Orwell game review, please email me. Otherwise, feel free to share it using the buttons below.