Watchmen, written by Alan Moore, drawn by Dave Gibbons and coloured by John Higgins, was serialised in 1986 and published as a graphic novel in 1987. Hugely commercially and critically successful, and long recognized as one of the greatest graphic novels of all time, it’s also one of the most influential alternative history novels ever published, establishing a trend towards more realistic, darker storylines and morally ambiguous, anti-heroic protagonists that still continues.

Watchmen takes place in an alternative 1985 where real-life costumed ‘superheroes’ emerged in the 1930s. The story imagines the effect such superheroes would have on the world. In the story, the hugely powerful Dr. Manhattan has helped the USA win the Vietnam War and given it advanced technology, but Nixon is still president and public opinion has tired of superheroes, leading to them being outlawed.

In a world where costumed vigilantes are illegal, a group of former ‘superheroes’ investigates a conspiracy that appears to be aimed at killing them all.

It’s 1985. A man falls to his death, pushed out of the window of his apartment by unknown assailants.

A masked vigilante, known as ‘Rorschach’ due to the changing patterns on his face covering, investigates the crime scene. He discovers a costume in the dead man’s closet and realises that he was the Comedian, another masked vigilante. Rorschach assumes that someone is murdering superheroes and goes to warn the others.

Most of the superheroes retired after the government passed a law, the Keene Act, making costumed vigilantes illegal, although Rorschach refused to comply and went underground to continue his brutal anti-crime crusade. The other remaining superheroes are the second Nite Owl and Silk Spectre, Dr. Manhattan and Ozymandias. The rest are either dead (Silhouette, Captain Metropolis, Dollar Bill, Hooded Justice), insane (Mothman) or very old (the first Nite Owl and Silk Spectre).

Dr. Manhattan, is the only superhero with any real superpowers – the others were simply costumed vigilantes. Now his ability to manipulate matter makes him part of the USA’s strategic deterrent against the Russians. Ozymandias, allegedly the cleverest man in the world, is now the head of a multinational conglomerate. Nite Owl retired when the Keene Act passed, without revealing his secret identity. Silk Spectre retired as a crime fighter, but is still Dr. Manhattan’s companion.

When a TV presenter angers Dr. Manhattan with allegations that he causes cancer, Dr. Manhattan exiles himself to Mars. His departure destabilises the world: the Soviet Union invades Afghanistan and then Pakistan. When the Soviets mass their forces to invade Europe, nuclear war appears imminent.

Meanwhile, Ozymandias narrowly escapes assassination, and Rorschach is framed for murder and imprisoned.

Silk Spectre moves in with Nite Owl. They try to have sex, but Nite Owl is impotent. Later they take Nite Owl’s aircraft out and rescue some people from a burning building whilst wearing their superhero costumes. This excitement enables them to consummate their relationship.

Nite Owl, who is starting to think Rorschach’s suspicions might be right, persuades Silk Spectre to help him break Rorschach out of prison. They succeed in doing so.

Nite Owl and Rorschach investigate the conspiracy and discover the involvement of companies linked to Ozymandias. They travel to the Antarctic and confront Ozymandias at his fortress there…

Look On My Works, Ye Mighty

Rorschach [blackout]tries to attack Ozymandias and Nite Owl tries to reason with him, but both fail. After he subdues them, Ozymandias explains his plan. He aims to unite the earth against a common, extra-terrestrial enemy to prevent the otherwise inevitable nuclear holocaust.[/blackout]

The [blackout]alien threat though is not real. Ozymandias has genetically engineered a giant, squid-like, and psychically powerful, ‘alien’. He has also invented a teleportation device capable of transporting the ‘alien’ to New York. The subsequent explosion will kill half the city’s population and send psychic shockwaves around the world. This combination will convince the entire world population that aliens are planning to attack the Earth.[/blackout]

Ozymandias [blackout]explains that all the events the superheroes witnessed were part of the cover up of his plan to save the world. He murdered the Comedian because he stumbled on part of the plan. He exposed Dr. Manhattan’s associates to carcinogens knowing that Dr. Manhattan was likely to withdraw from human affairs if provoked. He staged the assassination attempt on himself to remove any suspicion and framed Rorschach to slow his investigation. He accepts that the plan is ruthless but regards it as necessary and the sacrifices acceptable on a utilitarian basis.[/blackout]

Nite Owl [blackout]tries to persuade Ozymandias that his plan is evil. Ozymandias tell him it is too late for discussion, as he initiated the teleporter as soon as he saw the two superheroes approaching. New York has already been attacked by the ‘alien’.[/blackout]

Dr. Manhattan and Silk Spectre [blackout]arrive back on Earth, to witness the destruction of New York. Dr. Manhattan, who can usually perceive the future, cannot, and realises that this is because of tachyon generators in the Antarctic. They teleport there and discover Ozymandias, Nite Owl and Rorschach.[/blackout]

Ozymandias [blackout]lures Dr. Manhattan into a trap and disintegrates him. Silk Spectre manages to shoot Ozymandias, but, somehow he catches the bullet in his hand. Dr. Manhattan returns, angered by Ozymandias’s attack. Knowing he is at Dr. Manhattan’s mercy, Ozymandias tries to convince him that his plan has worked. TV broadcasts confirm that the Soviets have stood their troops down.[/blackout]

Dr. Manhattan [blackout]agrees that they must hide the truth from the public to give the world the chance of peace. Silk Spectre and Nite Owl reluctantly agree. Rorschach though refuses to compromise, and Dr. Manhattan kills him.[/blackout]

Ozymandias [blackout]and Dr. Manhattan talk and Ozymandias suggests that he did the right thing. Dr. Manhattan dismisses this sentiment and leaves Earth for the last time.[/blackout]

Watchmen has a ‘mystery’ plot (see novel plots). It is also an ensemble piece so has multiple protagonists. They all though are to some extent engaged in the investigation of the mystery.

The story also spends a great deal of its time on flashbacks that reveal the characters’ backstory and relationships. Ironically, Alan Moore has said that the choice to spend much of the story exploring the character’s backgrounds was fortuitous: the comic’s contracted run was twelve issues but the main plot was only enough for six.

Fortuitous or not, the decision to spend much of the story exploring the characters’ backgrounds is the source of its greatness, supplying a great deal of complexity and realistic human motivation to their actions.

The other great strength of Watchmen is the density of the symbolism. From the smiley face that appears dozens of times, the bloodsplash shape that reoccurs regularly, the interplay between the Tales of the Black Freighter and the main story, to the recurring doomsday clock and the constant use of symmetry. This symbolism is what gives Watchmen its re-readability: there’s a lot of detail to discover.

The Alternate History of Watchmen

Watchmen is unquestionably an alternative history novel (See What is Alternative History?) as the history of the world unambiguously diverges from real world history.

The point of departure appears to be the emergence of Dr. Manhattan in 1959. Although the story mentions events before 1959, such as the activities of ‘The Minutemen’, they don’t seem to change history. Only with Dr. Manhattan’s intervention does the world’s history noticeably alter.

Watchmen makes extensive use of the false document technique by including multiple excerpts from documents from the world of the story including:

See The False Document Technique for more on creating and using false documents.

Simply, Watchmen is the best alternative history graphic novel ever written. A must read. 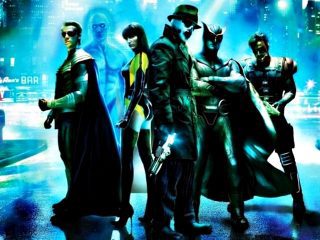 Watchmen was filmed in 2009, with an ensemble cast, including Jackie Earle Haley as Rorschach, Patrick Wilson as Nite Owl, Malin Åkerman as Silk Spectre, Billy Crudup as Dr. Manhattan, Matthew Goode as Ozymandias and Jeffrey Dean Morgan as The Comedian.

On release, the movie split opinion. Personally, I enjoyed it. It’s remarkably faithful to the original, apart from changing the ending, [blackout]with Ozymandias destroying several capital cities worldwide and framing Dr. Manhattan as the threat the world must unite against instead of ‘aliens’.[/blackout]

Want to read or watch it?

Watchmen is available on Amazon US here

The Watchmen movie is available on Amazon US here

If you’d like to discuss anything in my Watchmen review, please email me. Otherwise, please feel free to share it using the buttons below.